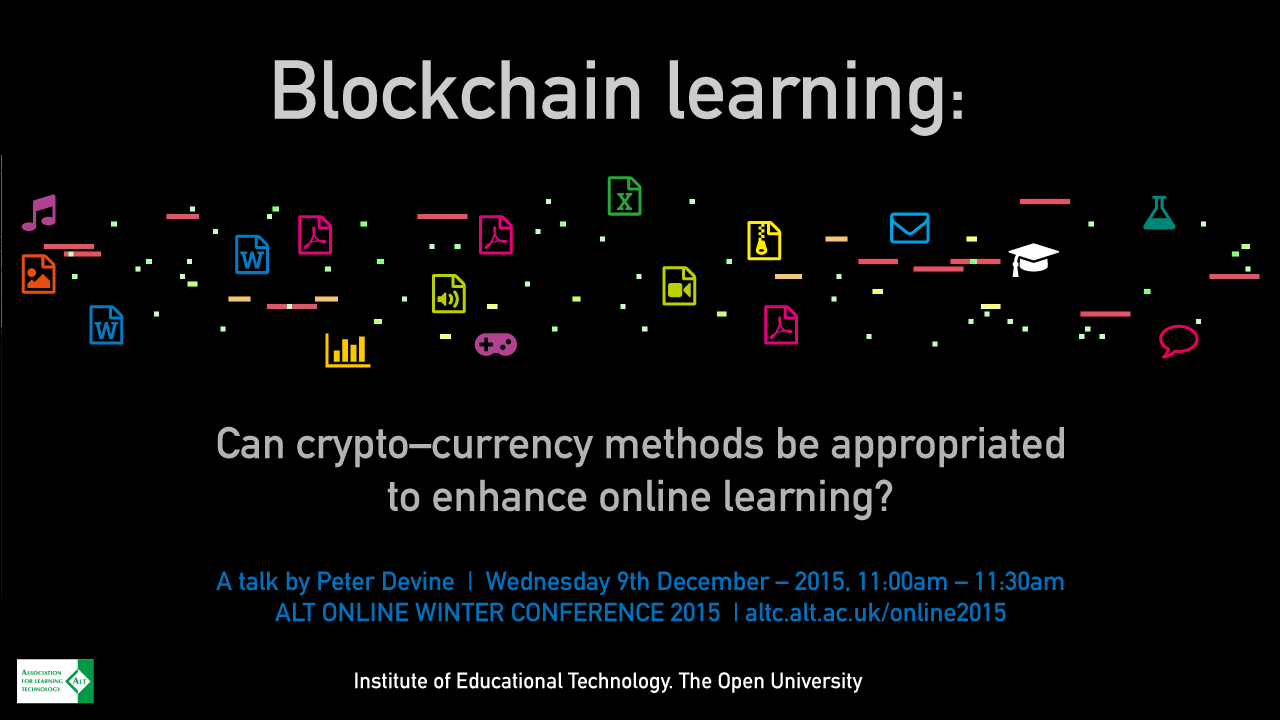 I was made aware of Bitcoin whilst working with Max Keiser – I assisted Stacy and Max on their web site and other projects between 2003 and 2012.

The thought of creating a parallel currency – one not bound by the questionable practices of central banks appealed to me and I read all that I could.

In about 2012 I was also working on a project at The Open University (OU). I had been asked to design an App for students – to assist their learner journey. The brief did not state what the App was for so I suppressed the sceptical voice inside and – along with my line manager Tammy Alexander – we developed a reason why a student might need an App.

The story I developed was along the lines of – I am a student and I want to do some study but I do not have any wifi right now! Some background – the OU offers its students online learning via a Moodle based virtual learning environment or VLE. It is managed via a database and if you do not have any connectivity you cannot connect to the database.

So, maybe the App could help overcome this problem. How can we allow the student to keep a copy of the database locally – just the bits they need with discrete updates and syncing to prevent all the user data being swallowed up. Wait – blockchain – the underlying technology on which Bitcoin – functions a little like a locally stored database, could that help students overcome this problem.

It turned out Blockchain was not the technology to help, and anyway the project was shelved – in all honesty the project should never have existed, but by applying design processes to the problem I had set wheels in motion.

Blockchain manages transactions. It tracks exchanges, records outcomes, is pseudo-anonymous but public and open. These are all great attributes – and what it the transaction was not financial, but learning and teaching. I began to explore peer-to-peer relationships where students could even offset educational costs by marking papers and work for an institution. Employers could peer into the development of students as they look for future candidates – all anonymous, based only on merit.

Enough! I had to write this all up – it seemed to good to be true. I spent most of 2013 and 2014 trying to write up my findings – well, I may work in a university but I am not an academic so I found this very difficult. An academic colleague stepped in to help sometime around late 2014 and I finally presented my ideas at an Alt-C event in 2015.

The experience was interesting and certainly helped me understand the process which academics deal with in their day-to-day work. However, my involvement in Blockchain stopped at this point. I published my findings and returned to my next design project. The Knowledge Media Institute (KMi) began to take Blockchain very seriously to investigate its potential and I wish them good luck.

The one aspect I would like to follow up on is the issue of the speed at which Blockchain operates. Some debate exists on this topic and I would vote against additional forks in the chain. I believe the Blockchain has a tempo which is free from the caffeine accelerated metabolism which infests much software development. The need for speed is over. Systems run fast enough for most things. Efficiencies can be introduced so long as the eco-system remains balanced. The relatively slow tempo of a blockchain transaction is to be celebrated not broken. I think when I do return to this topic I will focus on this theme.