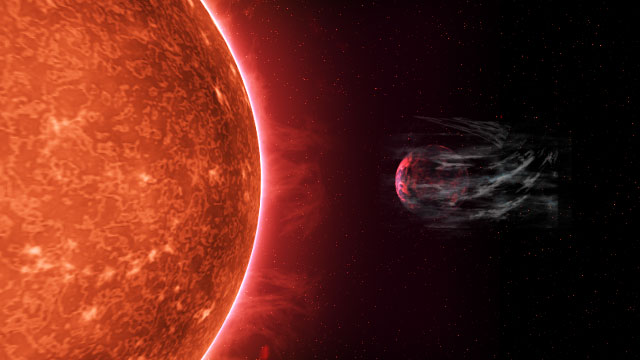 When Dr Guy Davies contacted me I felt a rush of excitement. The asteroseismoloists at the University of Birmingham tend to deal in the stuff of science fiction – except that they are in the process of turning it into fact, well, providing their hypothesis proves to be fact!

Guy informed me that he had some data and needed an illustration to help form a broad understanding of his scientific work. He wanted me to illustrate what happens to a planet when it gets stripped of its atmosphere. Oh, and he wants it early next week!

I used Adobe After Effects to create my cosmic event as the data was in X-Y-Z and although I do not work in 3D, After Effects lets me cheat. I also really like the way After Effects allows a sketchy approach to creating artwork. Working with many layers of noise, compressed into whisky smokey effects, I was able to conjure up my alien terrain very quickly. I was even able to animate a short sequence – in case television showed an interest.

View the final image on the BBC web site:
http://www.bbc.co.uk/news/science-environment-36016748